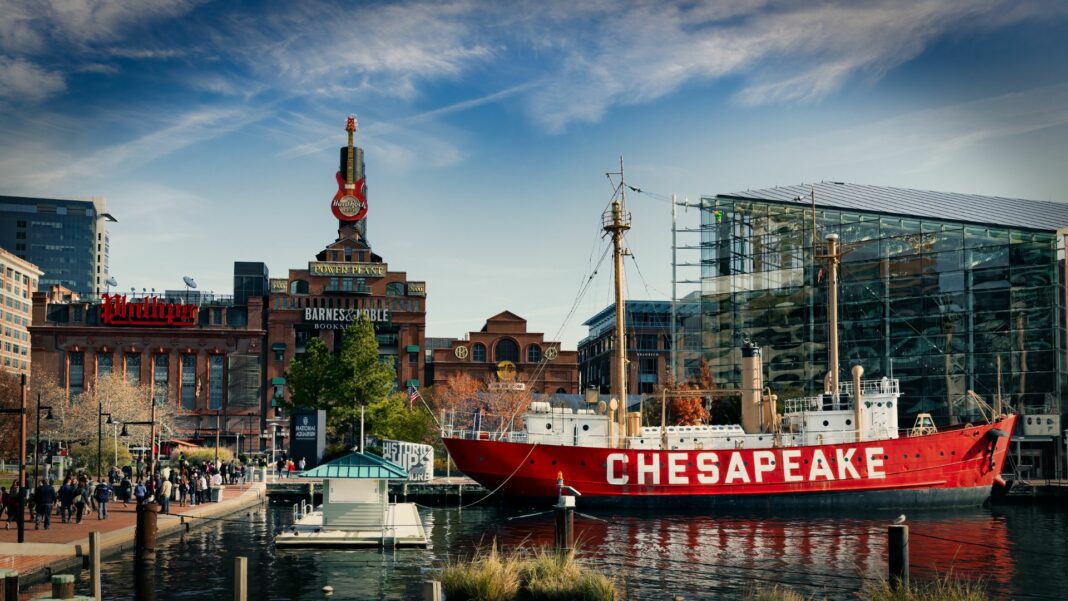 Baltimore is Maryland’s most populous and famous city, with its rich history and unique culture. Whether you love sport, shopping, or eating out, Baltimore delivers an engaging experience for residents. Discover 25 Baltimore fun facts about the city locals call The Greatest City in America.

1. Baltimore is Maryland’s most populous city

With a population of around 576,500, Baltimore has more residents than any other city in Maryland. More than 60% of residents are Black or African American, and many Asian and Hispanic residents live here.

2. Michael Phelps was born in Baltimore

The most decorated Olympian of all time was born in Baltimore on June 30, 1985. During his career, Michael Phelps won 23 Olympic swimming gold medals, more than double his rivals. He also has three Olympic silver and two bronze medals in his collection.

Baltimore certainly breeds winners, as it was also the home of Babe Ruth. Born George Herman Ruth Jr. in Baltimore on Feb. 6, 1895, his knack for hitting homers made him a baseball legend. He hit 714 home runs during his 20-year career and helped the Red Sox and New York Yankees to World Series wins. In 1936, he became one of the first people inducted into the Baseball Hall of Fame.

4. Baltimore has more than 225 neighborhoods

With so many communities to choose from, Baltimore has the perfect place for you to call home. You’ll appreciate the restaurants, pubs, and stores along O’Donnell Street in Canton if you love going out. This waterfront neighborhood is famous for its classic brick and Formstone row houses. Fells Point is one of Baltimore’s oldest neighborhoods. You’ll fall for its charm as you stroll down the cobblestone streets. Baltimore also reflects a modern side, more than Old World charm, as the Hamilton-Lauraville neighborhood in the northeast quadrant illustrates.

5. Baltimore was the filming location for many famous movies and TV shows

Parts of Baltimore may look familiar to entertainment buffs as the city is a popular filming location. The makers of “House of Cards” and “Veep” chose Baltimore as a stand-in for Washington, D.C., when filming their hit shows. Baltimore also hosted filming for “The Wire.” Local legend John Waters also films many of his cult films in his hometown, including “Hairspray,” “Pink Flamingos,” and “Polyester.” “The Social Network,” “He’s Just Not That Into You,” and “Step Up” also appeared within the Baltimore backdrop.

6. Baltimore is the best city for hospital care

According to HealthGrades, two local hospitals are among the best in the country. John Hopkins Hospital consistently ranks among the top 100 hospitals in the country, which puts it in the top 2% of hospitals. It also received awards for its pulmonary care, bariatric and orthopedic surgery, and surgical care.

HealthGrades also named MedStar Franklin Square Medical Center among the best 50 hospitals in the country for the third time. With this recognition, the facility ranks among the top 1% of hospitals nationwide. HealthGrades recognized the medical center’s prostate surgery and pulmonary care department with further awards.

7. National Bohemian is the official beer of Baltimore

The beer locals call Natty Boh has its brewing origins in Baltimore from its inception in 1885 to 1996. While brewers now produce the beer in Ohio and Georgia, nearly 90% of sales of this premium Bohemian-style beer come from Baltimore. Head to Monument City Brewing to sample locally brewed Baltimore beer.

8. The city is sports mad

Baltimore has good reason to love its sports. Charm City is home to some incredible teams, including its major league heroes: the Orioles and the Ravens. The Orioles’ history dates back to the start of the American League in 1901. The franchise that would become the Orioles was first known as the Milwaukee Brewers. With a net worth of nearly $1.2 billion, the Ravens are the 12th most valuable NFL team. The Baltimore Blast plays in the Major Arena Soccer League, while the Baltimore Nighthawks battle in the Independent Women’s Football League. The only tough decision is deciding which team to support.

9. The city has some incredible, unique traditions

Baltimore knows how to bring the quirk. Since 1994, Honfest has been one of Baltimore’s most colorful festivals. Think beehive hairdos, spandex, and leopard print. The city also hosts Maryland Deathfest, North America’s most prominent death metal festival. You never know what you’ll see at Baltimore Improv Fest, a seven-day festival celebrating the art of improvisation.

10. Baltimore is one of the country’s best shopping cities

Forbes once named Baltimore among the best shopping cities in the country. Shopping centers originated in Baltimore, and today complexes like White Marsh Mall and The Power Plant continue the tradition. If you prefer browsing boutiques, head to the Inner Harbor, Fells Point, and Federal Hill.

11. The Baltimore Museum of Art has the world’s most extensive Matisse collection

If you love the art of French master Henri Matisse, head to the Baltimore Museum of Art. The museum has more than 1,200 of his pieces, more than any other public institution on the planet. Highlights include “Blue Nude” and “Large Reclining Nude.” While at the museum, check out other masterpieces from Picasso, Monet, Degas, and Gaugin.

The favorite summer treat originated in Baltimore during the Industrial Revolution. Kids used to ask their parents for shaved ice as the ice route traveled through Baltimore. Mothers created syrups to add to the ice to make them more palatable. The traditional egg custard syrup is still famous in the city. Most of the country now calls the shaved ice treats snow cones, but they’ll always be snoballs in Baltimore.

13. Baltimore has more than its fair share of statues

Baltimore has more statues and monuments per capita than any other place in the United States.  There are statues celebrating iconic Americans connected to the city, including Billie Holiday, Edgar Allan Poe, and Frank Zappa. History buffs also shouldn’t miss the Fort McHenry National Monument, Holocaust Memorial, or Confederate Soldiers and Sailors Monument.

14. The National Aquarium is the state’s largest paid tourist attraction

With more than 20,000 creatures, you can easily spend a day marveling at the marine life that calls this Inner Harbor attraction home. Award-winning exhibitions showcasing creatures from the Amazon, Atlantic coral reefs, and the river gorges of Australia help visitors learn more about the natural world. See why many regard the National Aquarium as one of the best aquariums in the country.

15. Much of the city burned down

While Baltimore’s history stretches back to 1729, many buildings only date back to the 20th century. That’s because a fire swept through the city in 1904, burning down more than 1,500 buildings spread over 70 blocks. Admire the contrast between newer and older architecture as you walk the downtown streets.

16. You can get fit at the airport

There’s no excuse for letting your workout regime slide while traveling through Baltimore/Washington International Thurgood Marshall Airport. This airport is the only one in the United States with a hiking and biking trail. Walk along this 12.5-mile path, which offers views of the airport, including the Dixon Aircraft Observation Area. This trail complements a pair of cardio trails endorsed by the American Heart Association.

With an average annual rainfall of nearly 42 inches, Baltimore gets its fair share of showers. Determined to make those wet days more comfortable, German immigrant Francis Beehler opened the country’s first umbrella factory in Baltimore in 1828. The Beehler Umbrella Factory celebrated its roots with the slogan “Born in Baltimore, raised everywhere.” While the West Lexington Street factory got torn down in 1908, a plaque marks the site.

18. ‘The Star-Spangled Banner’ originated in Baltimore

If Francis Scott Key hadn’t spent time volunteering in the war effort in Baltimore, he might never have written America’s national anthem. He wrote the lyrics as he admired the national flag waving at Fort McHenry during the War of 1812. The lyrics are all-American, but he adapted the melody from a British drinking song.

19. Baltimore has the original Washington Monument

While the Washington Monument in Washington, D.C., is more famous, Baltimore’s Washington Monument came first. Builders completed its construction in 1829, 19 years before they laid the first brick in the nation’s capital. Architect Robert Mills designed both monuments, but Baltimore locals insist theirs is the best. The 227 marble steps might look imposing, but the city’s scenic views from the top are worth the climb.

20. Baltimore is the birthplace of the American Railroad

The Baltimore and Ohio Railroad originated in Baltimore in 1827. The first railroad line, from Baltimore to modern-day Ellicott City, opened in 1830. Today Baltimore has two train stations: Pennsylvania Station (Penn Station), where the Amtrak trains stop, and Camden Station, serving commuters traveling to and from Washington, D.C.

21. The city has an incredible food and bar scene

African American laborers built the shipbuilding and railroading industries. While Maryland didn’t outlaw slavery until 1864, Baltimore had the largest free Black community long before this time. Baltimore’s Black residents have long been at the forefront of American history, fighting for equality, developing the arts, and shaping the nation. Thurgood Marshall, Frederick Douglass, Isaac Myers, Billie Holiday … the list goes on and on.

23. Baltimore is a brainy city

Edgar Allan Poe lived with his aunt on North Amity Street between 1832 and 1835. During this short time, he met his wife and won the short story contest that launched his prolific literary career. His former home is now a museum, where you can see the writing desk and the chair he sat at while writing poetry and some of his first short stories. You can also raise a glass at one of his last known haunts, The Horse You Came In On Saloon, and pay your respects at the Westminster Burying Ground.

25. Baltimore locals are proud of their city

Residents know Baltimore isn’t perfect, but its flaws add character to the city and its people. Most locals couldn’t dream of living anywhere else, and they always consider Baltimore home if they move out. Whether the rest of the country agrees, the people who live there will always love Baltimore.

If you’re ready to move to Maryland’s most populous city, visit Zumper first. Browse the Baltimore listings, request a tour, and apply for a great place using our one-click application. We take the hassle out of apartment hunting so you can focus on the fun of your next adventure.

The post 25 Fun Facts About Baltimore appeared first on The Zumper Blog.